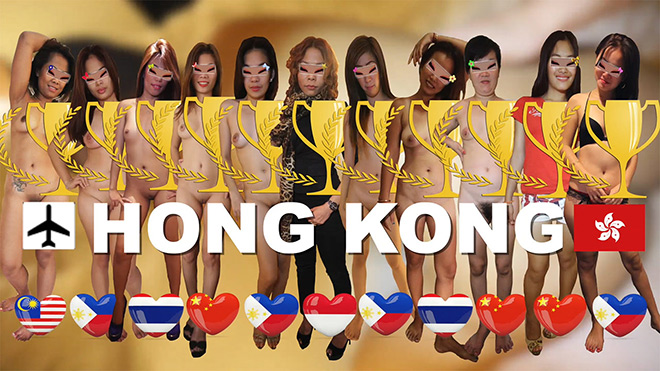 Foreign girls solicit for paid sex in Wanchai. This line up of naked women is the trophy series from a new website. The flags indicate their nationalities.

Many expats dream about scoring a high paid job in Hong Kong. It’s not just because of high salary and low taxes. Daily expenses are high in this special administrative zone of China and former British Colony. One of the big benefits of working and living in Hong Kong is access to great nightlife. Those who want prime pussy order upscale Kowloon escorts and those who prefer cheaper and friendlier girls venture out to Wanchai, a district famous for it’s girlie bars, watering holes and discos staffed with foreign women who obviously solicit for sexual services. Most of these hookers are from neighbouring countries like Vietnam, Cambodia, Philippines, but there are also exotic freelancers from Colombia and Russia (they charge 3 times as much for being import models). Let’s stick with the friendly, cheap Asians. A newish website Asian Sex Diary shows sex scenes with many Hong Kong freelancers from discos like Neptune and Wanchai. Most of them have cleanly shaven girlie bits (an indication for increased sexual activity).
Read all of: Asian Sex Diary.
Freelancers are prostitutes that work own their own. They are neither employed by a sauna brothel nor do they need a pimp or mamasan to feed them customers.